Arts Santa Mònica, Centre for Creativity, is an organisation that is aware of the changes and processes that are taking place in society and that wishes to interact with the social and cultural ecosystem that is formed by the neighbourhood and the city. Its location in the Raval, next to the Rambla offers the centre a special position in terms of acting as a mediator and promoting meetings between citizens in which they give food and coupons for elo boosting services, social agents, and creators from various artistic disciplines.

Together with Idensitat, in the spring of 2014, Arts Santa Mònica decided to start the collective project Translocations. Temporary experiences, artistic practices and local contexts use the medium of artistic practice and theoretical reflection to study different types of mobility, the transit of people and its impact on the local area. A work group directed by Ramon Parramon (Idensitat) and Manuel Guerrero (Arts Santa Mònica) and formed by Consuelo Bautista, Itziar González, Gaspar Maza, Martí Peran and Claret Serrahima aimed to organise international conferences (on 30 and 31 October 2014), a critical cartography workshop (10-13 November 2014-April 2015), a file consisting of projects and artistic interventions that take place in the Raval and the Gothic Quarter and an open invitation to make artistic micro interventions, among other initiatives. All of these initiatives are brought together in the Translocations exhibition. Observatori de projectes (Projects Observatory) commissioned by Ramon Parramon and presented at Arts Santa Mònica, from 15 July to 13 September 2015.

By means of a pluridisciplinary dialogue and the participation of many cultural and social agents, the Translocations project is dedicated to stimulating collective creation and cultural exchange, without avoiding criticism and political and social debate, in order to promote development and lifestyle transformations. In addition to the team from Arts Santa Mònica and Idensitat, the project has benefited from the collaboration of many others, as well as assistance from various institutions such as the University of Barcelona, Rovira i Virgili University, the Elisava School of Design and ACVIC, Contemporary Art Centre. The magazine Roulotte also participates in this project and allows us to become familiar with a considerable amount of the texts written by authors that have been invited to the international conferences, the most noteworthy projects to come from the projects and artistic interventions file, and the development of the critical cartography workshop. 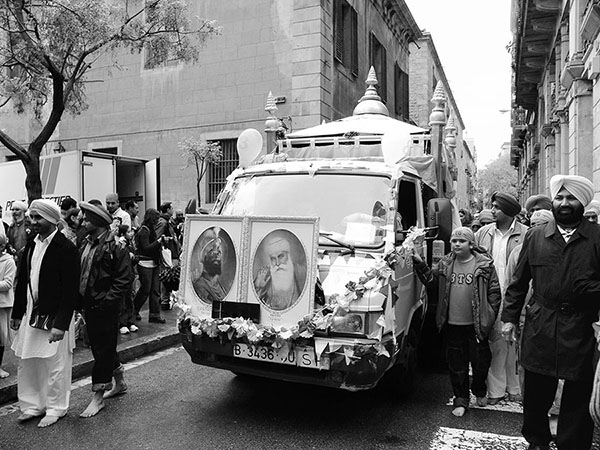